What a lovely Othello! 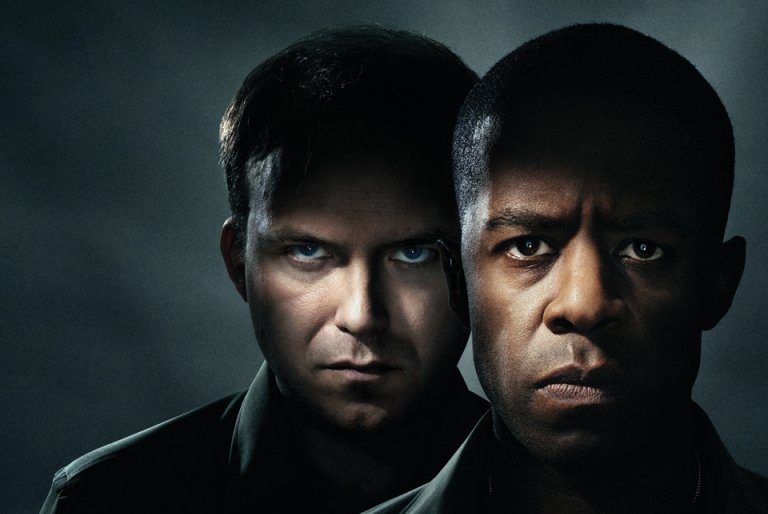 Nicholas Hytner’s acclaimed National Theatre production of Shakespeare’s “Othello,” with Adrian Lester in the title role and Rory Kinnear as Iago, was broadcast live from the National’s Olivier Theatre, London on Thursday, Sept. 26. I went along to my local cinema to see the highly acclaimed show, which only has a few performances left at The Olivier (named after Laurence Olivier) and the NT Live is a great way of seeing shows without having to travel to the West End.

In Nicolas Hytner’s contemporary production of “Othello,” two leading British theatre actors, Adrian Lester and Rory Kinnear, have drawn acclaim for the fresh clarity and credibility of their performances as Othello and Iago – characters whose ultimately lethal actions can sometimes strain belief.

Lester was last seen at the National in the title role of Nicholas Hytner’s production of “Henry V.” His screen work includes five series of the BBC’s “Hustle.” His theatre work also includes “Red Velvet” (2012 Critics’ Circle Best Actor Award), “Cat on a Hot Tin Roof,” “Company” (Olivier Award), the title role in Peter Brook’s production of “Hamlet” and Rosalind in Cheek by Jowl’s “As You Like It.”

Rory Kinnear’s film and TV work includes “Southcliffe,” “Black Mirror: The National Anthem,” and “Skyfall, Quantum of Solace.” His work for the National includes “The Last of the Haussmans” with Julie Walters and the title role in “Hamlet” (Evening Standard Best Actor Award), both of which were broadcast by National Theatre Live.

It’s a gripping production of a tragedy that is also an intensely painful psychological thriller, and though the production lasts more than three hours, it never loosens its dramatic hold.

Any production of Othello stands or falls with the actors playing Othello and Iago, and the double-act between Lester’s Moor and Rory Kinnear’s Iago proves exceptional. In the early scenes Lester is a man at ease with himself, he doesn’t rise to the racist calumnies of Desdemona’s anguished father Brabantio, and responds with both eloquence and humour. Kinnear plays the evil Iago to perfection and his little looks and mannerisms add to the role beautifully.

Desdemona (Olivia Vindall), who was an aggravatingly feeble force in the first half, explodes into an emotive, passionate display of pain, and I’m certain not only tugged but pulled at the heartstrings of every audience member in the devastating scene of her death.

Lyndsey Marshal (The Hours, Cleopatra on HBO’s Rome, and as Lady Sarah Hill in BBC period drama Garrow’s Law) as Emilia is a tour de force: I like the fact Hytner made her a soldier too with a clear understanding of the male dominated power structure, she survives the military and her husband Iago by being something other than herself. The moment she decides her soul is more important than her life, she becomes the moral centre of the play. Jonathan Bailey’s Cassio is appropriately pure and naive but without appearing weak, a tricky balance to strike.

Hytner and designer Vicki Mortimer have gone all out for contemporary realism. The Venetian senate meets in emergency session in an underground war room; and, once the action shifts to Cyprus, we are in a modern military encampment, all wire fences, concrete bunkers and towering lights resembling erect cobras, the modern setting works really well for such a classic tale and from the opening scene you can feel that this story could be happening here and now and not in the 16th c.

Everything about the production is clear, clever and comprehensible and The National Theatre showing it live in Cinemas is a fantastic idea as it brings more people to see the great productions the NT put on.

See http://ntlive.nationaltheatre.org.uk for further productions being screened into your local cinema.