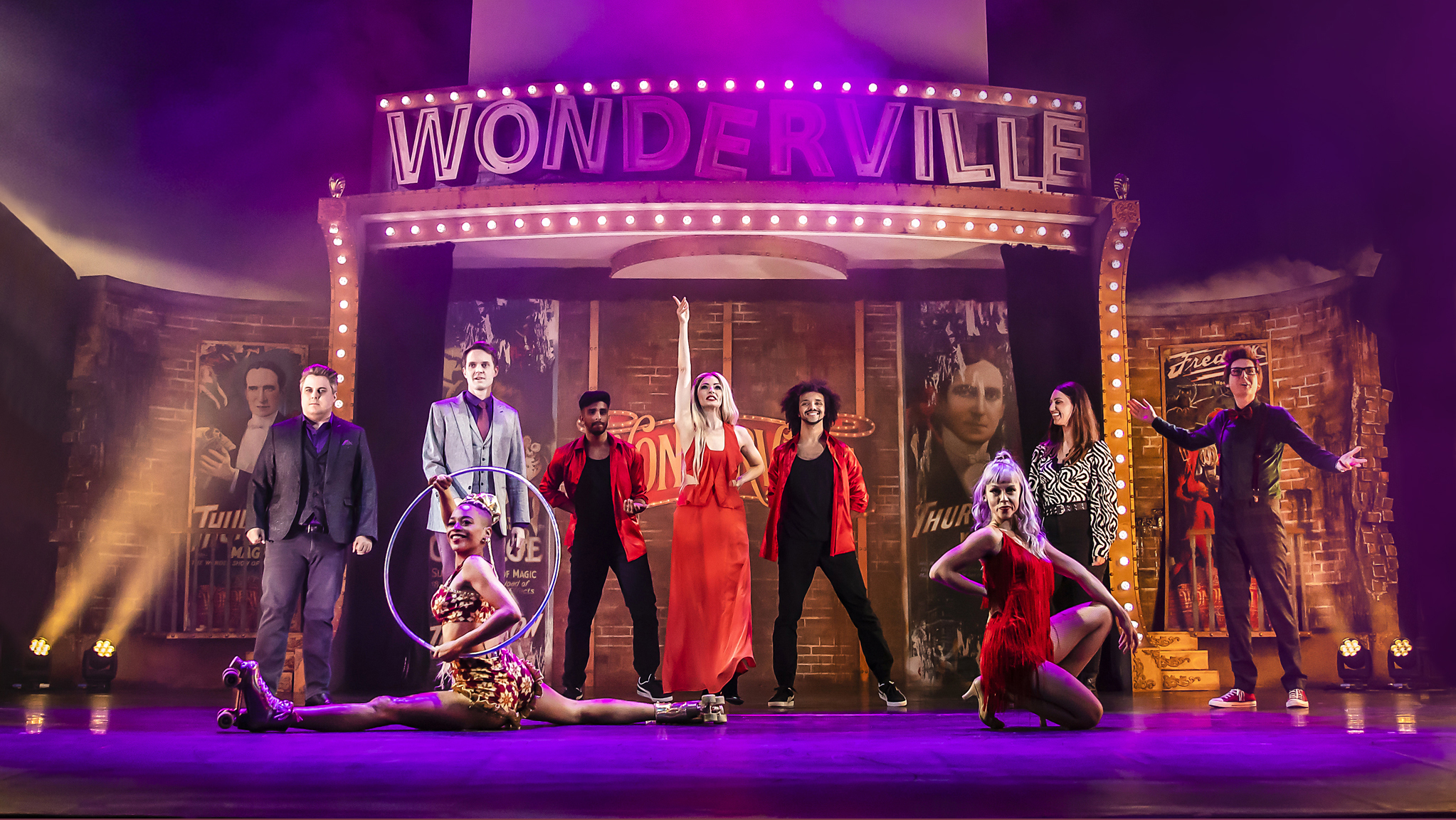 Head to the Palace Theatre in London to be transported into a world of magic and illusion with the supergroup at Wonderville.  Home to Harry Potter & The Cursed Child usually the Palace transforms into a Summer home for the troupe of illusionists, mentalists, and hula hooping stars. The MC for your evening is the energetic mind reading Chris Cox (star of Broadway and the West End and a BBB contributor) and after an introduction to our entertainment for that night there are usually five unique acts and a sixth guest act but unfortunately Josephine Lee was injured so we were treated to two guest acts: Emily England and Kat Hudson.

Starting off the show was Edward Hilsum, The Magic Circle Triple Crown Winner who’s sleight of hand and non-speaking opener to the show was interesting to see rather than glitz and glamour razzmatazz. Edward provided pure stripped back magic and was a unique way to open the show, he magically made doves appear and clever use of handkerchiefs with candles and roses appearing and disappearing. When he gets a small boy onto the stage later in the show his storytelling and passion for magic is clear to see and the young boy brought on stage no doubt will be mesmerised for years to come and maybe he will be the next generation of magic! Following up was Young & Strange, reminiscent of Penn & Teller the duo brought laughs and fast paced illusions.  When Young climbs into a cardboard box, Strange has heaps of fun ramming sharp wooden poles into the box and I love the unique twist at the end! The duo also appears again in the second half in a Las Vegas style tribute show to Siegfried & Roy, complete with Tigers, 80s mega mix and flamboyant costumes! Performing fast action high energy flowing illusions with their lovely assistant the audience clapped and cheered wanting more.

One of our guest acts appeared next a star from Britain’s Got talent: Kat Hudson in her West End debut performing clever tricks using the whole of the audience in a collective gasp!  Her natural stage presence and humorous tales draw you in and her set flew by and we were left wanting more! Finishing the first half was the sensual Symone combining hula hoops, roller skating and lively twiddling and twirling as she danced across the stage. Giving a cheeky end to the first act leading into the interval the music and performance left you with a happy glow.

The acts are also joined sporadically by the ensemble made up of Annalisa Midolo, Louise Douglas, Mervin Noronha (Dance Captain) and Lee Pratt. The fabulous foursome look like they are having great fun and bring lots of high energy to the stage with imaginative choreography and assistance to the overall experience of Wonderville.

After a G&T in the bar and discussions of how was that done, we got back in our seats for the second half. Straight from Las Vegas and appearances on Britain’s Got talent and America’s version Emily England mixes up circus style pizzazz with conjuring up playing cards from thin air.

MC of the show Chris appears in a few mind-bending sequences but a standout performance for us was his fun act using mind control cards which the audience had filled in before the show and put in a box that was always on display. Chris chose a sealed envelope and guessed that the man who’s card he had in his hands was an architect and his celebrity crush was Natalie Portman. Moving to another section of the theatre he guessed what a girl had eaten for dinner before the show and then moved closer to where we were seated in the stalls and worked out the lady next to us was a child minder but kept saying about Shakespeare, the woman was confused as were we because we had written Shakespeare’s Sonnet 18 for Chris to recite on stage! Chris asked my companion to stand up and stop thinking as she was messing with his mind!  Chris then recited Shakespeare, did the dance we had written down and then guessed my colleague’s cats name, we were mind blown as the name is very obscure!  This was amazing and jaw dropping as he didn’t even have our card in his hand! Chris is a Duracell bunny jumping, sprightly, mind-boggling performer who helps gel the evening together and also brings his unique talent to the stage.

Unlike other magical shows we have gone to we didn’t spend the journey home wondering if some of the audience members were planted as we knew we were not! Wonderville gives a fresh, dynamic, and thrilling spin on variety performance and fun for all the family. Conjure up a ticket today for a Wonderville time!

Wonderville is at The Palace Theatre till the end of August 2021.