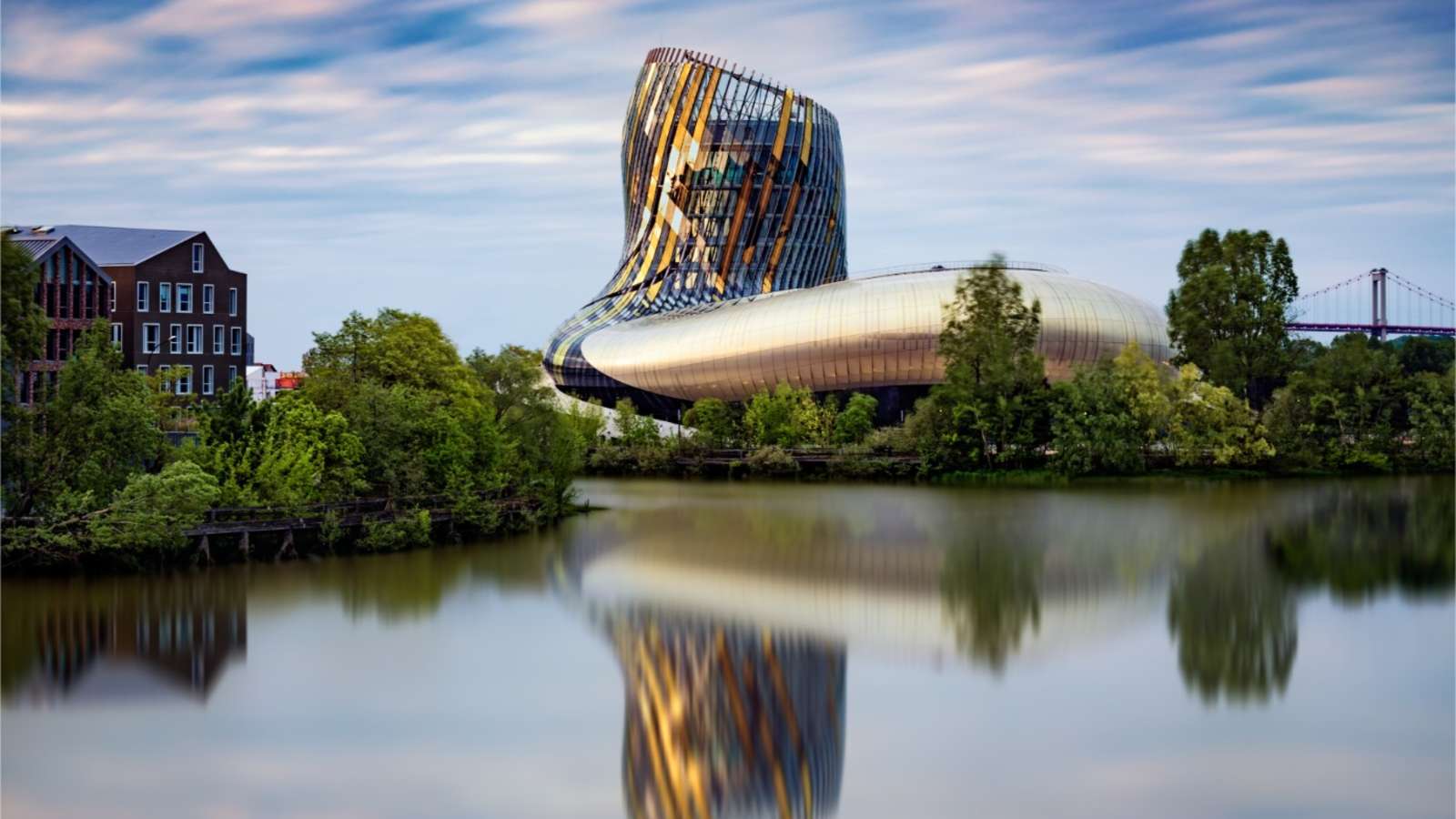 I first heard about it on Facebook. Someone shared a video of drone footage from a sweeping pass over the striking edifice. Someone else tagged me. I shared it and the news quickly spread. Among my friends, a new holy land had been discovered, a place where our passion would be indulged… La Cité du Vin in Bordeaux. Managed by the Fondation pour La Culture et Les Civilisations du Vin, the project houses a fine dining restaurant, a fleet of tasting rooms and lecture spaces where regular events are held, a library of wine-related books, a huge interactive museum of wine production through history and, of course, a wine cellar with over 800 wines. The thrilling XTU-designed building perches on the edge of the Garonne river, a location which was part of the inspiration for its design. Something between the swell of the tidal river and the swirl of wine within a glass, the modern architechture creates a wave of shimmering glass which stands out against the industrial surroundings. Of course, this place demands a pilgrimage for professional and amateur oenophiles alike and as soon as a trip to Bourdeaux presented itself, I knew that we would need to set aside time to visit La Cité du Vin…

While the average visit is approximately two hours, one could definitely spend a couple of days at La Cité du Vin, particularly if one opted to attend one of the many guided tastings. In typical wine-country style, the exhibition is designed to be accessible or children and families, rather than as an adult-only experience. No doubt there are many budding young wine producers and experts who would be very pleased to be included! Even as an adult, I found myself eagerly pushing all the buttons and enjoying the carefully designed participatory experience of learning about wine. Visitors are provided with audio guides in eight different languages and then allowed to roam at will; pushing numbered buttons on the handset of the audio guide begins a recording that corresponds with the area you are visiting, but there is no set order.

The exhibition contains videos and set pieces that rival artistic installations in their sensory impact. Some areas feature artefacts from civilisations that enjoyed wine through history and cleverly presented videos encourage guests to become part of the action (aboard a wine merchant’s ship and at a dining table with famous chefs). One display that I found particularly ingenious was a series of display jars full of different items attached to rubber horn bulbs, which allow visitors to puff fragranced air into their own faces to sample the various scents that appear in wines (inhale with care, some are not as enjoyable as others…). In another area, visitors could lie back and watch a video about the relationship between wine and love, while seductive whispering and moaning was emitted from various speaker (one to be aware of if you do take the family!).

As well as the permanent exhibitions, La Cité du Vin hosts temporary exhibitions and on the occasion of our visit this was ‘Renversant’, a collection of glass presented in unusual and creative ways. As a lover of the surreal, I particularly liked Etienne Meneau’s Carafe No.8, a many legged container reminiscent of something from War of the Worlds and Fabien Verschaere’s Eat Me, a devilish dinner set full of satanic shapes and imagery of gluttony! Back on the ground floor, there is brasserie style dining available and a boutique at which one can purchase all things wine related. Latitude20, where one can actually purchase some of the wines one has learnt about, is an impressive structure in itself, with wines from destinations as unusual as Indonesia and Tahiti. The ticket price for La Cité du Vin also includes the opportunity to taste some unusual wine at le Belvédere, the 8th floor bar and viewing area. One can enjoy a dazzling vista of Bordeaux’s city centre to the south, while sipping on wines specially selectd by a wine culture interpreter (again, the young are not excluded, but for them there is only grape juice on offer).

Restaurant Le 7, the fine dining concern, is located – unsurprisingly – on the seventh floor, with a dramatic view of Bordeaux’s evening lights. The dining area is open and bright, the menu a combination of classic French flavours with a twist. Of course, diners come of the wines, and the list is varied and interesting, although it’s perfectly possibly to put yourself in the hands of capable staff like restaurant manager Roxanne or our waitress, Eloise. After a tasty amuse bouche of smoked sturgeon and carrot puree, I chose the confit and seared duck foie gras from Chalosse, with an apple and calvados accompaniment, which paired well with the melony and not-too-sweet tropical flavours of a Francois Lurton ‘Melody’ Gros Manseng dessert wine. Charlotte’s starter was smoked south-west duck breast, presented in thin slices wrapped around truffle and liver foam, served with a citrusy and quite dry Bordeaux Blanc 2017 from Chateau Guiraud, who are better known for their Sauternes.

The main courses were both fishy. My ‘wild fish’ of the day turned out to be brill, served with onion, anchovies, goat cheese and a Virgin Mary sauce that all together really tested the strength of flavour in the fish. The wine, a Cuvée des Ardoises du Château des Erles 2016 Fitou was a little spicy, which complemented the goat cheese and, given the powerful umami from the anchovies, I felt that this red was a good choice. Like a classy and elegant truffle pig, Charlotte had sought out the delicately seared native scallops, the truffly fragrance of which was earthy and robust. Paired with a light Cinsault Pinotage from Zoulou Tentation in South Africa, this dish was definitely unusual – with a risotto made from potatoes! – but also pleasantly warming.

Francois Lurton’s ‘Melody’ dessert wine made a second appearance to accompany Charlotte’s choice of ‘Copacabana’ dessert. With tropical fruits and attending mojito shot, the dessert definitely captured the essence of seaside relaxation, complete with cocktail umbrella and sand-like crumb. My wine was also a Lurton (this time from the Hermanos range), a Tempranillo 2016 which was slightly woody and completed the holy trinity of red wine, chocolate and coffee when paired with the flavours in my dessert. The chocolate and coffee ‘sphere’ was most a creamy combination of all that is good and I would have eaten two more if it had not finally been time to leave La Cité du Vin and return to la cité de Bordeaux.

La Cité du Vin is one of the best museums that I have ever seen – as an educator, I can tell you that passive absorbtion of information isn’t nearly as effective as something you can touch and taste and play with, and you can do all of these things at La Cité du Vin. Whether it’s a quick trip to grab a bottle of rare wine or a family activity for a few hours on a rainy day, or whether you camp out here in the reading room for a week and sign up for all the tastings, you will definitely leave knowing more about wine. Bordeaux is a wonderful city for the wine-loving traveller, with some of the best wines of all time being produced in the surrounding areas (Chateau d’Yquem, anyone?), and La Cité du Vin is the perfect pairing.