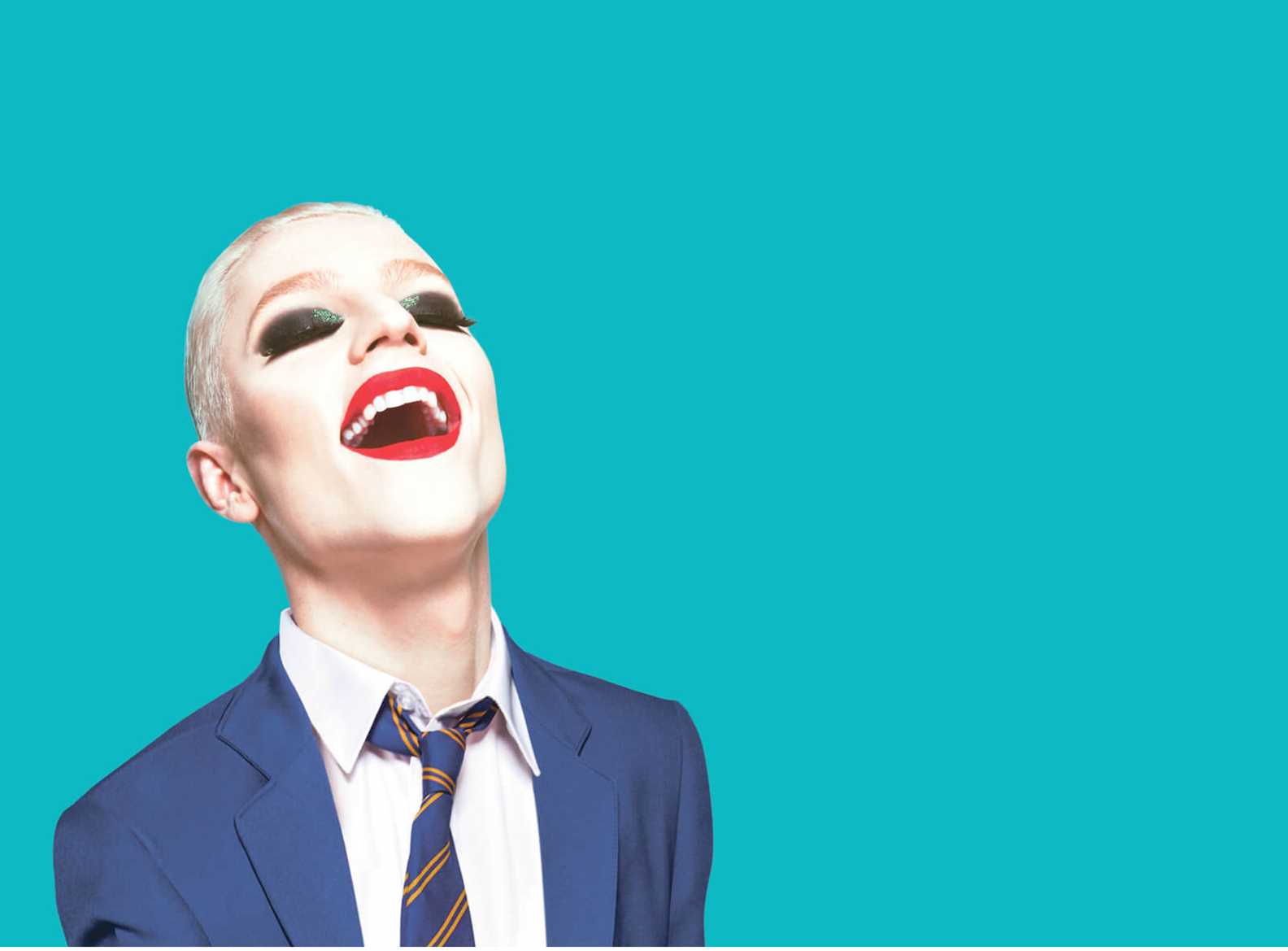 After a short run in Sheffield (19 performances), teenage drag-queen musical Everybody’s Talking About Jamie sashayed into the West End last November and this sassy musical – a cross between Billy Elliot, Kinky Boots and Priscilla Queen Of The Desert has become a huge hit and I went to see why.

Inspired by a real-life story, schoolboy Jamie New (based on the Firecracker’s BBC Three documentary, Jamie: Drag Queen At 16) is told by his careers teacher’s psychometric test that when he leaves school he should become a forklift-truck driver or a prison guard . . . yet all he yearns to be is a drag queen.

We are introduced to Jamie New (John McCrea) straightaway, kicking off the action with an ever so bouncy number called ‘And You Don’t Even Know It’, where the character outlines the future he envisions for himself. With his pink glittery socks under his school uniform, there is no doubt that Jamie stands out from the crowd. McCrea shines in this role, his voice beautiful, his comic timing making even the smallest moments ones to remember, and not to mention his absolute sassiness, all while presenting an underlying vulnerability, an internal battle that becomes more prominent as the production goes on.

John McCrea anchors the passionate and occasionally naive Jamie, he has to confront a starchy careers teacher, bigoted absentee father and swaggering classroom bully, but this is not so much a drama about coming out or facing intolerance as a portrait of a teenager growing into his own identity.

Jamie not only wants to be a drag queen he also wants to wear a dress to the prom and is told no by Miss Hedge (Tamsin Carroll). I thought Tamsin gave a superb performance of “Work of art” after catching Jamie practicing his make-up in the school bathrooms. This song captures the essence of Modern Art and I have to say it’s still stuck in my head!

The highlight’s of a strong supporting cast is Josie Walker as Jamie’s doting mother, glorious in her solo numbers showing the passion for her son and doing all she can to make sure he gets what he wants in life (including his first pair of stilettos). Lucie Shorthouse is amusing as Jamie’s earnestly diligent friend Pritti and Phil Nichol delights as his bear-like mentor Hugo, who reminisces eagerly about a past life as diva Loco Chanelle in the diva-tastic number “The Legend of Loco Chanelle”!

The stage, designed by Anna Fleischle, is highly adaptable, folding in and out, moving upstage and downstage and also being projected onto to suggest location. Parts of the set are also wheeled in and out, however these are also used to their full potential, with school desks being used to make a wall and even a catwalk. Lucy Carter’s lighting design works wonderfully with this, and helps transport us to fantasy worlds, the 80s, and a drag shop, contributing to the drama and larger than life characters that we are presented with. Jessica Plews’ make-up and wig design is unrivalled, as the drag queens are fabulously made-up, transforming the actors playing them, staying true to what it is to become their characters.

Kate Prince’s choreography is a delightful mix of contemporary, ballet and hip-hop, providing relentless energy and current dance movement details such as the dab during one number featuring the students. Mixed in with the trending movements are timeless moves such as vogueing and a touching contemporary dance duet, which shows an interesting range of styles throughout the show.

I left that theatre sashaying along Shaftesbury humming the tunes and feeling on Cloud 9. This show is beautiful with a touching story and gorgeous songs by Dan Gillespie and Tom Macrae. With a refreshingly diverse cast, each character contributes to the vibrant energy which runs through this musical, making for a brilliantly fun, touching and truly unmissable night of theatre. I highly recommend we all talk about Jamie for a along long time.