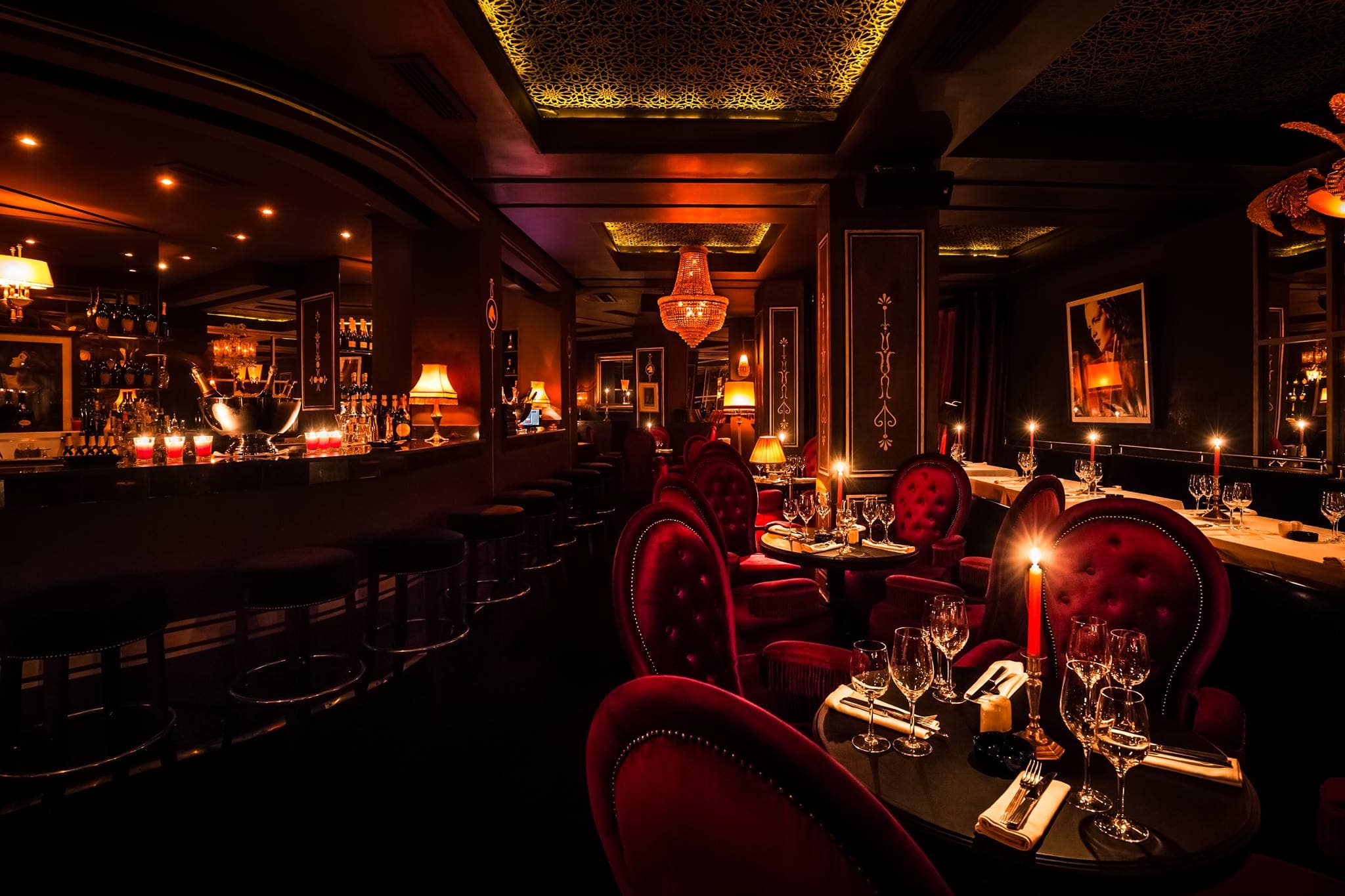 In every city, there are a couple of exclusive venues that have the sort of reputation of Le Palace Marrakech. Having played host to a long list of A-list celebrities and international dignitaries (Google it, no name-dropping here), Le Palace is known for its French-inspired menu, the high-quality service and the opulent décor. Between the palm-fringed leather-and-cigars colonial lounge of the ground floor and the candlelit chic of the red velvet club room downstairs, it’s clear that no expense has been spared in creating this unashamedly lavish destination restaurant between the city’s trendy Gueliz and Hivernage neighbourhoods. Ever on the hunt for new places to be decadent, this was one Marrakech landmark we couldn’t resist.

Even at 10pm, August in Marrakech can be quite sticky. After a welcome from Le Palace’s restaurant manager Mehdi, we immediately ordered espresso martinis (rum, not vodka, as the BBB recipe requires) to help shake off the sluggishness of the warm night. The ground floor bar area was already quite buzzy, with mostly small groups of smart casual diners. It was nice to be able to see the goings-on behind the bar – when one is waiting for the first drink, it is such a relief to see the ingredients of your order coming together so speedily.

We chose, however, to sit in the cavernous and extremely dimly lit boudoir-style downstairs. Early as it yet was, we were the only guests, but it did fill up over the next hour or so. With gilded mirrors and seemingly endless dining tables, the luscious crimson seating gave the impression of a great banqueting hall, in which every guest sat on a throne. Mysterious statues of feline shapes were tucked into corners and photographs of high fashion, predominantly striking shots of Yves Saint Laurent, featured on most walls. Our waiter Zdady brought margaritas and the Le Palace menu – which is extensive – so that we could begin our meal.

We followed Zdady’s recommendation for the first course and opted to sample a selection of the starters. These included jamon iberico, crab and avocado toasts, tuna tataki, lobster and green bean salad and a sea bream carpaccio. Something about the saltiness of the jamon alongside the sweet tomato bread was a winner for me – I’m a sucker for that salt kick when I’m hungry – but Charlotte was torn between the Asian flavours of the meaty, just-seared tuna and the sizeable hunks of citrus-spiked lobster.

This ample starter had already filled us quite substantially, so we chose to dial down the gluttony for the next two courses. Having read rave reviews of the ravioli, we ordered one to share and found it a very interesting dish. Juicy crayfish was packaged in four pockets of delicate pasta and the foie gras had been used to create the accompanying cream sauce. Once again, the sweet/salt contrast was very tasty, but in my opinion there was something missing that needed to cut through those soft, luxurious pillows and their silky sauce.

Fortunately, the sharpness that I was craving abounded in our next course. The curiously named “Crying Tiger” is a Thai-style dish of grilled steak, served with a spicy dipping sauce that combines dried chilis with the ubiquitous nam pla (fish sauce). The steak was cooked to our liking and it was a festival of flavour when dipped into the powerful sauce, a flavour that immediately caused us to recall another crying tiger at Restaurant Georges in Paris. A number of sides can be ordered with this dish, but we had shamelessly asked for fries, so that we might better dip the whole lot into that delicious sauce.

By the time we were ready for dessert, some hours had passed and our final course was accompanied by a dancing display that wove its way between the dining tables. Gorgeous costumes reflected the flickering candle glow and graceful limbs swayed to the sounds of traditionally inspired music. In the dim light of the downstairs dining room, one can easily imagine being part of some royal celebration, lounging on the ornate chairs and quaffing beverages while the entertainment unfolds in front of you. My choice of dessert, a “Chocolate Temptation”, was a combination of mousse and chocolate cream too tempting to resist and Charlotte barely had a chance to take a photograph before it was gone! She had chosen the traditional Paris Brest, with what she reported as a heavenly, smooth praline cream contained within.

A definite romantic ambiance had developed as the room had filled and there was no shortage of couples gazing into each other’s eyes over their pasta. Le Palace would be a spectacular destination for a romantic dinner or a special occasion; your dining partner or guests are sure to be wowed by the venue, the food and the service. Dinner being over and us not being romantically attached – at least, not to each other – we decided to leave Le Palace’s delicious dungeon in search of a dance floor where the night might continue. We agreed, however, that it would be tough for any establishment to follow this impressive start. I challenge you to dine here and not feel as though you have become royalty, in a palace of your own.