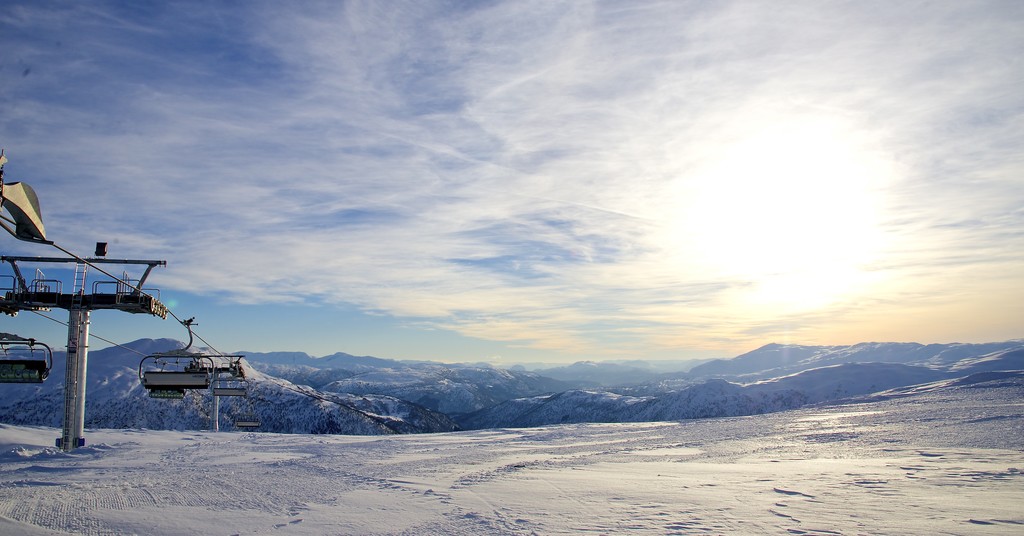 A local philosopher Hans Schelheim claimed back in the 60s that one day tourism would come to the quiet little farming valley of Myrkdalen, of course like all great stories the locals all laughed at him thinking he was some kind of lunatic; but ohhh who was to have the last laugh. The long sighted visionary was indeed correct and in 2003 the first ski run was opened and the main hotel opened in only 2012. It has been a gradual and comfortable growth, under one company who owns every part of the ski resort; some developers might argue ‘why not build it all now?’, but I like the Norwegian way of creating the ski resort step by step with consideration and respect for the environment. There is no town as such, but rather the hotel, 700 private log cabins, ski school and ski shop/rental. The resort is continually growing with more shops planned and an onsite bakery too. Because the hotel was built so recently, the environmental impact was heavily considered and the hotel has its own Bio-Energy facility supplying all of the heating from burning local fuels. They have kept the buildings compact where possible leaving the land alone and the level of recycling is astronomical with 92% of all waste being recycled! They are also looking at kite-wind technology to run the ski lifts.

The choice of dining in Mrykdalen is fantastic considering there is only one hotel. There are three different concepts with Restaurant Tunet serving deliciously handmade pizzas and pastas, perfect for a more laid back dining experience. Restaurant Nuten is the main restaurant serving breakfast, lunch and dinner with A la Carte and buffet style, make sure you eat in there at least once the food is delightful. The third choice is Restaurant Nuten Fondue where you guessed it, traditional fondue is served, once again a great experience to be had with family or friends. The resort regularly runs festivals to keep it lively from music festivals, kids festivals and as I experienced, even a retro 80’s freestyle weekend with Norwegian Ski-ballet heros and live 80’s music.

Myrkdalen is one of the most snow sure in Europe, the area receives 18-24 metres of snow per ski season and the area has its own microclimate keeping the surrounding mountains much colder than Voss, so much so that it is possible to ski from mid November through to the beginning of May with the potential for some ski touring in Summer. This is the ultimate ski in – ski out hotel/resort, if it was not for the rubber mats then one could ski straight into the ski room.

The resort seems to have something for everyone, from freeriding fanatics to families which is great for freeriders with children who want a holiday that can satisfy both demands. The pistes are wide and open and are perfectly groomed. They have built much to entice at Myrkdalen, from terrain parks and amazingly fun ski cross slopes, a great variety of pistes and some fantastic off-piste too; the resort even has FIS slopes that may just entice the 2030 Winter Olympics… watch this space.

The shape of the mountains in Myrkdalen mean that one can not really see the majority of the ski area from down below. Up above awaits large sweeping vistas, wide open flowing pistes and gargantuan fields of freeride potential, one could also see the potential of how the ski resort might grow and expand further into the mountains in the future. This may not be the biggest of ski resorts, but this is quality over quantity for each piste delivers a thrill on every descent.

The beginners area is well positioned with no through traffic from other pistes and thus no advanced skiers travelling through. There are 4 pistes serviced by 2 button lifts which should give enough variety for the beginner

The blue pistes cover the majority of the mountain, which means that intermediate skiers can explore the entire area. These pistes are wide and perfect to practice your carving technique.

The mountain is your oyster with a collection of great pistes to pick from. I particularly enjoyed the ski cross course No. 12 Myrkdalenscrossen, once you learn the course it just gets better and better.

The top of the mountain is reserved for ski touring, so there are plenty of areas to explore above the lifts. There are also plenty of wide open fields between the pistes, that apparently stay untouched for days after a snowfall, some of them have a fairly gentle gradient so would be well suited to experiencing powder for the first time.

For more information on the ski resort visit www.myrkdalen.no