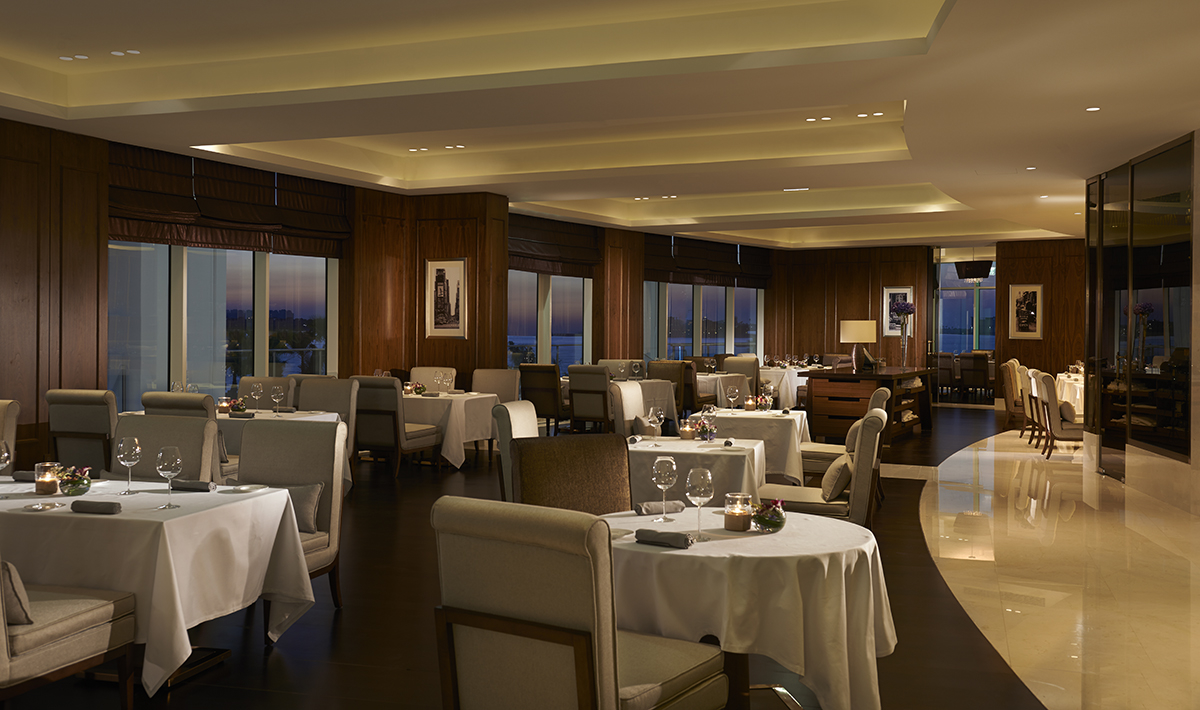 If I was forced to only eat one cuisine for the rest of my life, I don’t think I would be able to choose, but if I had to pick my top five, Italian would definitely be among them. It lends itself to experimental gastronomy, as well as featuring some of the best comfort classics, and many of the highlights of the cuisine are relatively easy to recreate at home. Something special happens, however, when this delicious cuisine becomes the palette of a master culinary artist, such as internationally renowned Michelin studded chef Heinz Beck, in a stunning restaurant environment such as Social by Heinz Beck at the Waldorf Astoria on the iconic Palm Jumeirah, Dubai.

Social by Heinz Beck is reached through the sweeping corridors of the Waldorf Astoria on the Palm’s outer edge and its terrace provides a stunning view across the fronds of the Palm towards the highly illuminated Atlantis at the centre. Inside, the room is classically styled with white linens and a touch of opulence in the glittering sheen of gold upholstery. Mahmoud, the head waiter, showed us to seats beside the full length windows and presented us with a cheeky Laurent Perrier Rosé while we perused the menu. The majority of our service was provided by Shehan, who worked with his charming colleague Niwas to ensure all our needs were met. Both waiters were very attentive, but Shehan deserves a special mention for being delightfully funny and entertaining throughout the meal.

The amuse bouches were a veritable feast for the senses, presented atop tree-like stands that offered a different mouthful at each level, as well as additional molecular pearls of olive and burrata on individual spoons and a dish of rice crisps flavoured with saffron, zucchini and rice. Best among these morsels was a bread, butter and anchovy croquette, as well as a beetroot macaron and a fragrant truffle sponge which had an interesting texture that I have never previously encountered in a restaurant.

A second amuse bouche was rather a surprise after the extensive nibbles – and bread with homemade olive oil and river salt – which we had already devoured, but it was a welcome treat. Tuna tartare had been drizzled in citrus and served with pumpkin puree, puffed saffron rice and slivers of radish. The bright flavours of this dish almost served as a palate cleanser before our starters and the colours were striking! When the first courses did arrive, we were able to enjoy them without being so hungry that they were gobbled without enjoyment.

A sucker for seafood, Charlotte had opted for the lobster medallion, which was served with avocado and tomatoes and had a delicate freshness that paired well with the accompanying Planeta La Segreta Bianco 2015 from Sicily. The citrus and greenish flavour brought out the sweetness of the blanched lobster flesh, while my Chateau Ste Michelle 2015 Reisling from Columbia Valley, Washington, was a similarly standard of pairing, a little sweeter and off-dry with notes of lime and peach. My dish was a duck foie gras terrine in three different shapes, with earthy artichoke and a few drops of black truffle oil. Although I had initially been concerned about the truffle flavour being overwhelming, it was very subtle and a treacly reduction was the main flavour that contrasted the smooth, salty terrine.

As is traditional in Italian cuisine, the starters are followed by a first course of pasta or risotto and this meal was no exception. My choice was Heinz Beck’s signature fagottelli carbonara, which were little exploding parcels of pasta full of smooth cheesy sauce, all smothered in a herby butter. Charlotte’s choice was a rich veal ravioli with pumpkin puree and black truffle, which had a deep earthy complexity. Together with this course, we were both served a light, fruity and well-balanced Trimbach Gewurtztraminer from Alsace which cut through the richness of the pasta dishes.

In order to maximise our tasting range, Charlotte and I frequently order different dishes and exchange a mouthful, but there was a main course on the menu of Social by Heinz Beck that we were both unwilling to forgo in exchange for a different dish and a mere taste of our original choice. The dish was duck breast on a creamy topinambur (Jerusalem artichoke) puree with bok choi and raspberries and when the dish arrived, we both knew we had made the right choice. Firstly, there was a lot of duck breast, far more than one is usually served, and it was perfectly pink and succulent. Secondly, the raspberry was a simple yet so effective way to add a layer of tanginess to the overall flavour and the crunchy bok choi was similarly well selected as an accompaniment. Thirdly, the dish contained a simply divine mini pastry of juicy con fit duck leg. Finally, the wine was lovely; we immediately decreed this Le Château de L’Aumérade Cru Classé Rouge “boshable”, starting off smooth and juicy with a punchy finish.

For dessert, our choices diverged again. Charlotte opted for a tiramisu that was creamy, light and rich with coffee thoughout, presented in a number of different textures and shapes that delighted the eyes as much as the palate. Unable to resist the chocolate (as usual) I had chosen the ‘Sweetful Chocol’8’, a dessert inspired by the Tarantino film The Hateful Eight, in which eight characters battle against each other for supremacy. In this dessert, by contrast, eight different chocolate elements combine together to form a happy union. Between choccy delights, such as mousses, discs and sponges, a light coconut cream added a delicious additional layer of flavour. Our desserts were accompanied by the unusual pairing of Sula Late Harvest 2015 from India, and the desserts both sharpened in flavour by the orangey notes within the wine.

Finishing the meal with a digestif from the trolley, we both remarked on how we felt light and breezy, despite having consumed several courses that might have been heavy if served elsewhere. As the Italian saying goes: ‘eat to live, don’t live to eat’, and Social by Heinz Beck had shown itself to have perfectly captured one of my favourite aspects of Italian cuisine, in which the meal is a celebration of flavours and aromas, sometimes in excess, but never to the extent that overeating prevents the enjoyment of life after dinner. Social by Heinz Beck could be a destination in itself, with its incredible food and amazing service, but if you’re going on to explore the rest of Dubai’s Palm Jumeirah, you’ll still have some room for another helping of la dolce vita.