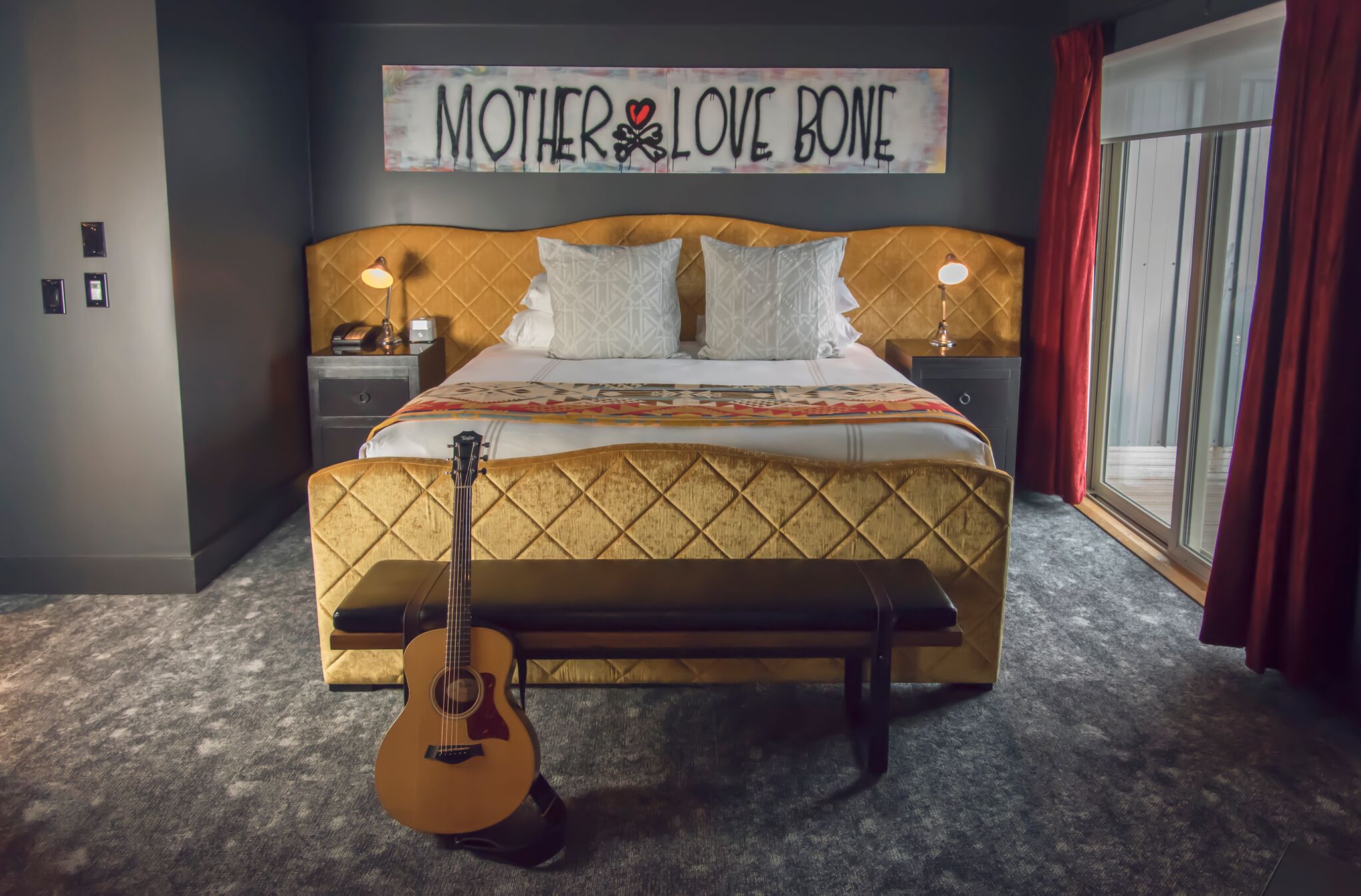 West Coast cities like Seattle are famed for their curious and contemporary history, from the remains of the 70s free love revolution of San Francisco, bygone era of Hollywood in California, to Seattle’s own debauched stories of Rock and Roll music. The Edgewater Hotel, in Seattle, is well versed in these, having hosted famously the Beatles who fished from their balcony room in 1964, and also, Led Zeppelin, The Rolling Stones, Pearl Jam, The Village People, Ozzy Osbourne, KISS, Wings, Neil Young, Frank Zappa, Blondie, Jewel, David Bowie, Emmy Lou Harris, Iggy Pop, Jessica Simpson, Mel Tormé, REM, Rod Stewart, Willie Nelson…and more. This is one of Seattle’s truest, and oldest hotels, built in 1962 for the World’s Fair, and the only one boasting an envious waterfront location. Probably, this is the only hotel you should consider staying in when in town if you want an authentic, rustic, Pacific North-West Coast Seattle experience.

Framed by the Olympic Mountains, This is a hotel with a cosy-cabin vibe, featuring deer antlers in the lobby, giant looming fireplaces, endless cushions and sofas lining the bars and waiting areas, and a spectacular seafront view. The tables are tree-stumps, there’s an abundance of candles, pine, and woodwork, lots of earthy blacks, browns and reds, as well as an endless array of nature photography lining the walls. But this isn’t just an ordinary wood-cabin. The hotel is large, and ostensibly very grand – despite its cosiness – with modern light fixtures, a high-end bar and restaurant, and luxe features tucked in between the cosy cabin feel.

Resting on top of Pier 67, located just a 15 minute walk or so from the legendary Pike Place Market (where you simply have to go for the fish tacos and local beers), it’s close to the Seattle Aquarium, Space Needle, and a 30 minute stroll from the lively bars of Capitol Hill. The hotel has 223 rooms across 4 floors, and each room features a gas fireplace, pine furnishings, plush comforters, complimentary bath amenities (complete with rubber ducky), minibars, in-room coffee maker, data ports, voicemail, and large windows with views of Puget Sound or downtown Seattle. The Edgewater has two specialty suites: The Beatles Suite and The Penthouse which take luxury to another level. The hotel’s also eco-friendly, as it should be, when surrounded by such natural beauty, with two Green Eco-Leaf ratings having implemented many eco-friendly procedures like using local growers and food supplies at Six Seven restaurant and 100% recyclable guest key cards. On top of the gorgeous rooms, one can pay $16 per day to use the hotel’s bicycles, wifi, business centre, fitness centre, phone chargers, local newspapers, phone calls, urban wellness provisions (so you can go running!), sheet music to play, record players and DJ albums to listen to.

In addition to the rooms, there is a restaurant where one can eat breakfast, lunch, and dinner, called Six Seven. An award-winning venue, it brings breathtaking panoramic views of Elliott Bay and the Olympic Mountains with Northwest inspired cuisine. See my food review in the dining section for more on the divine dinner I had here.

My guest and I arrived on a Saturday afternoon, having driven down from Vancouver and been stuck for 4 hours in heinous traffic and then, after getting completely lost in Seattle, spending a further 2 hours stuck in more traffic. Needless to say, upon arrival we were frazzled and looking forward to retiring to vegetative states in our hotel rooms. We were delighted to be greeted with warmth and enthusiasm at the concierge desk, after valet parking our car ($40 per night), and being taken up to our room. The second floor room delivered us a breathtaking waterfront view onto the bay, with the mountains in the background, and water just a few metres below us. The windows open wide enabling you to really feel you’re on the water’s edge. There was a lovely large fireplace in the corner of the room, as well as a generously sized bathroom, large bed, and wardrobe space. In essence a very comfortable hotel room, yet given the close proximity to the water and large windows, coupled with the wooden furnishings, it felt more like a luxury log cabin on a forest edge. We rested here for an hour before freshening up and going downstairs for dinner, where, we were told live music would play from 9pm onwards.

After our dinner and evening out, we slept peacefully in the quiet room, waking up to the water lapping at the hotel edge outside and another glorious sun-filled day awaiting us. Breakfast, though not included in the nightly rate, was excellent in the restaurant downstairs, offering a very diverse menu that included everything from steak to Bloody Marys, eggs dishes, pancakes, and salads. Check out was seamless and the valet staff at the parking lot were warm and efficient, ensuring that all in all, despite being there for only one night, we had a very comfortable and rejuvenating stay.