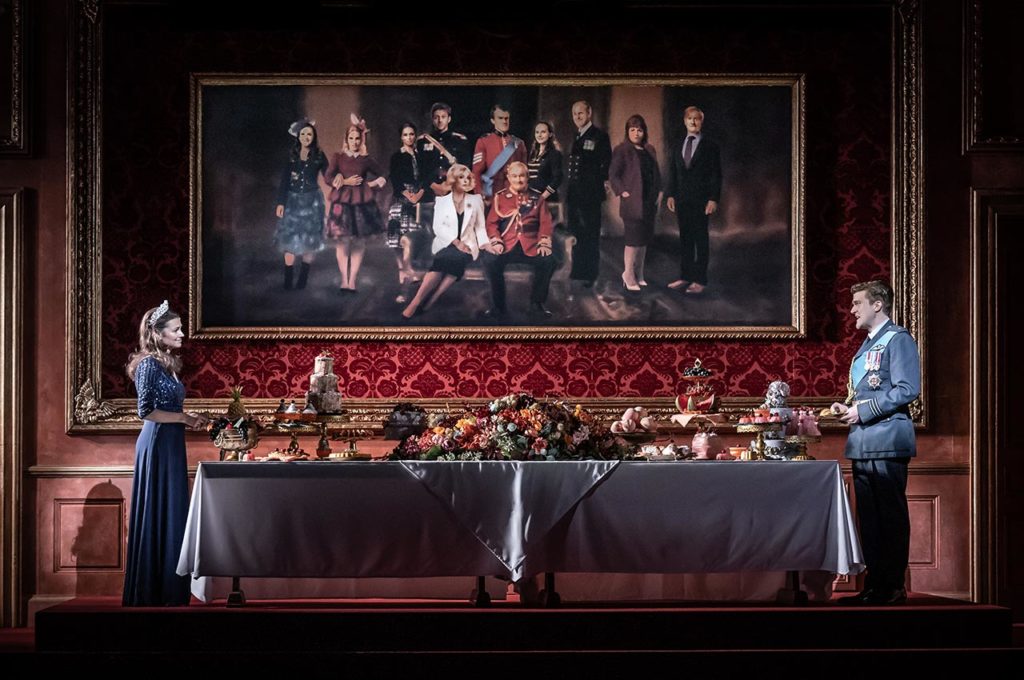 A spinoff from the C4 sitcom The Windsors is a new comedy play hosted at The Prince of Wales Theatre over the Summer. The play imagines the younger royals putting their differences aside to stop the evil Camilla Parker Bowles making the dim-witted Prince Charles absolute monarch after the Queen abdicates. Writers George Jeffrie (who sadly died of a heart attack aged 56 last September) and Bert Tyler-Moore bring the TV show to the stage for their last project together and following them from the screen to stage is Harry Enfield as Prince Charles, Tom Durant-Pritchard as Prince Harry, Tim Wallers as Prince Andrew and Matthew Cottle as Prince Edward.

The production is introduced by Matthew Cottle’s foolish Edward, who plays a hilarious selection of extra parts as other players, constantly mugging to the audience, speaking directly to us, and getting the audience to treat Camilla as the Pantomime baddy booing and jeering! I did giggle at the nod to Edward’s time working for Andrew Lloyd Webber! Tracy-Ann Oberman is in fine form as an overbearing Camilla plotting on installing her husband Charles as an absolute monarch and split up the ‘Fab Four’, William, Kate, Harry and Meghan for good. Camilla’s solo number in the second part about the late Princess Diana is something you never knew you needed in your life!

Sophie-Louise Dann is a very funny Fergie, now doing duty as a maid for Harry and Meghan in Malibu and getting $1 more than minimum wage! Tim Wallers delivers a confident performance as Prince Andrew; you can tell jokes and script changes have been added with the recent headlines! Ciaran Owens and Kara Tointon are Kate and Wills; great to see Kara performing some amazing dance moves and her portrayal of Kate is a hoot, with the talk of her gypsy past! Ciaran Owens is a nice-but-dim Wills and has an impressive sword fight in the finale!

Tom Durant-Pritchard gives a handsome performance as Prince Harry, hilarity ensues in the second part of the show while dressed in full battle gear to put the fab four back together again.  Crystal Condie plays Meghan Markle recording her Spotify podcasts, looking after rescue chickens, detoxing and yoga poses, her impression is spot on and she could even pass for a professional Meghan Markle doppelgänger!

Eliza Butterworth and Jenny Rainsford are funny as Andrew and Fergie’s daughters Beatrice and Eugenie in drawling Sloane voices and fascinators, part of the plot is their campaign to prove their father’s innocence.  A mention for vocal coach Patricia Logue who has done a great job with the accents and pronunciations.

Comedy legend Harry Enfield as Charles is a big draw for this production. With a reimagining of his portrayal of Charles, for a live audience, he does not disappoint. There are plenty of ‘in’ jokes carried on from the television series thrown into his performance but at the same time, they do not exclude new audiences.  The whole cast work really well together and looked like they were having as much fun as the audience were.

Composer Felix Hagan has created some hilarious ditties, I am still singing “Royal Tour!”. Director Michael Fentiman keeps the pace fast and energetic, with the jokes and gags flowing over the 2 hours running time. It’s not like an episode of The Crown but you would probably know that if you have watched the Windsors on C4 already, nothing is safe!  Expect swearing, naughty jokes, Gollum impressions, scandal, and silly fun! I royally recommend you book a ticket today!

The Windsors: Endgame is Playing at The Prince of Wales Theatre till October 9 2021.