Fenchurch Terrace at the Sky Garden 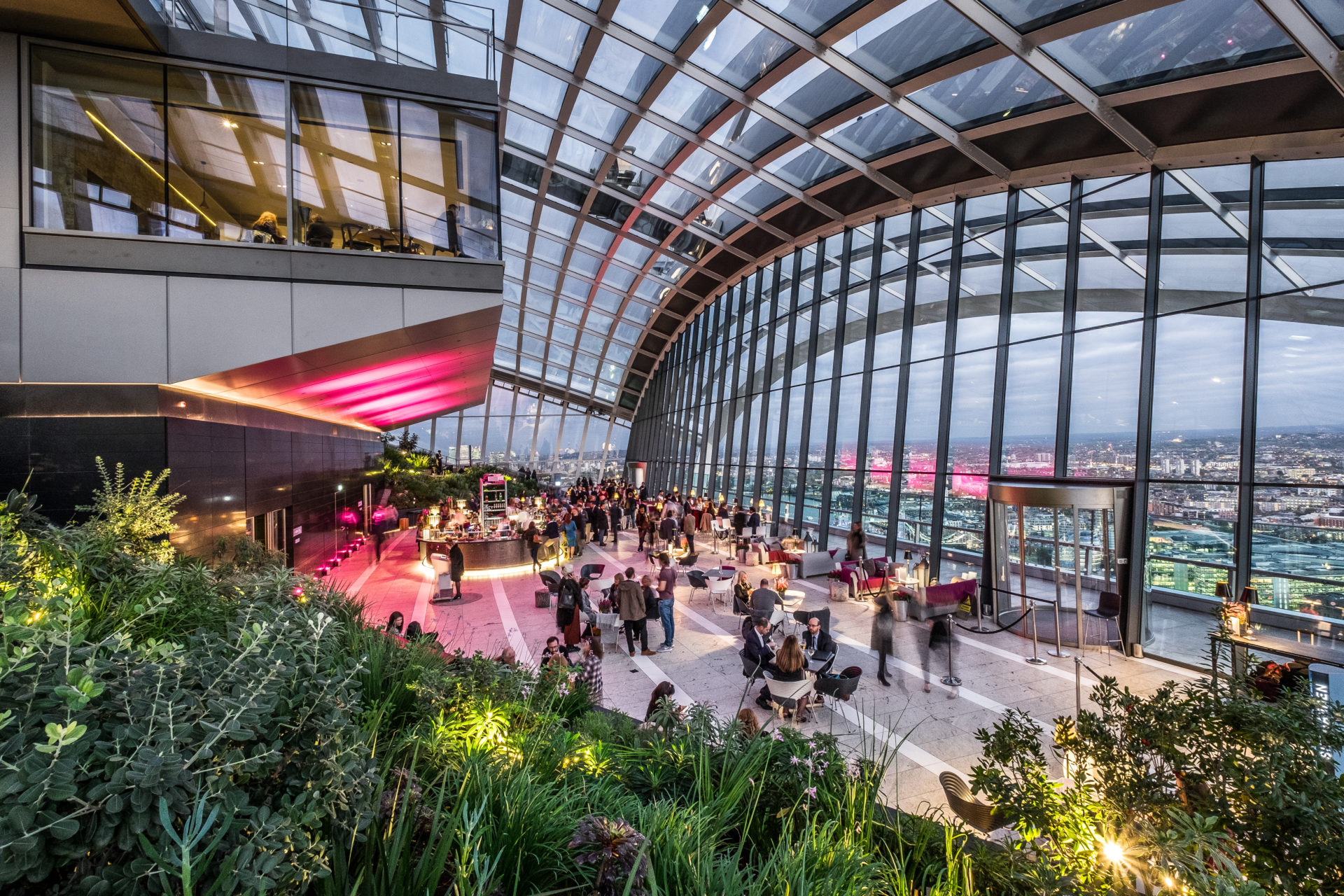 London has some big-hitting green spaces. And it’s not just the famous public parks that bring the city’s garden game. Developments such as the Kings Cross Granary Square raise the bar and that’s just the greenery on the ground. Look up and there’s a whole new level of life on London’s rooftops and in its skyscrapers.  Located in the City of London is one of the capital’s most novel spaces. The Walkie Talkie’s top three floors house the Sky Garden, a swanky, domed ceiling greenhouse complete with sophisticated bars, a brasserie and a restaurant. All with 360-degree views of London’s business district and well beyond in a space designed to offer ‘an open and vibrant place of leisure’ and an escape from the daily grind below.

A buddy and I visited Sky Garden one Thursday evening in summer, though I’d go back at any time during its spring-through-autumn session, with London’s bright lights at night being equally as impressive as its clear-day views. To the north is The Cheesegrater and The Gherkin, east is dominated by Tower Bridge with the rest of London unfolding to the south and west from such a height. Entry is free, though booking is important at one of London’s ‘most exclusive public spaces’ – a strange and somewhat paradoxical phrase to coin, but actually a fitting one for the environment. We sat on Fenchurch Terrace of the 37th floor, overlooking 35 and the slightly less ‘exclusive’ City Garden Bar below. A good spot: An early evening a funk band playing with people unsteadily drinking and dancing makes for great watching.

Floral cocktails are on the Fenchurch Terrace menu with Italian aperitivo liqueur Italicus doing a bar takeover. A Tom Collins with Italicus was sharp and fresh, as was the lightly alcoholic Italicus Cup. This liqueur isn’t as much about the boozing as being a refreshing summer tipple – how Italian… But the white negroni – featured to celebrate 100 years of the drink – is something to go back for. Sharing boards and several small plates are available on the terrace, the salmon rillette a beautiful dish if you don’t want to go big on the elaborate seafood sharing platter. Don’t forget you can head down to the Darwin Brasserie on floor 36 for a full menu or to the refined Fenchurch Restaurant.

Deliberating over whether to join the party reaching crescendo beneath, we instead went for wine and a cheese platter to finish off the night. Both decent, as was our decision to avoid the post-work scene below. Fenchurch Terrace opens up again for its season on 30th March, 2020. Perfect for booking ahead, looking ahead to spring.

Festive events in Manchester this Christmas