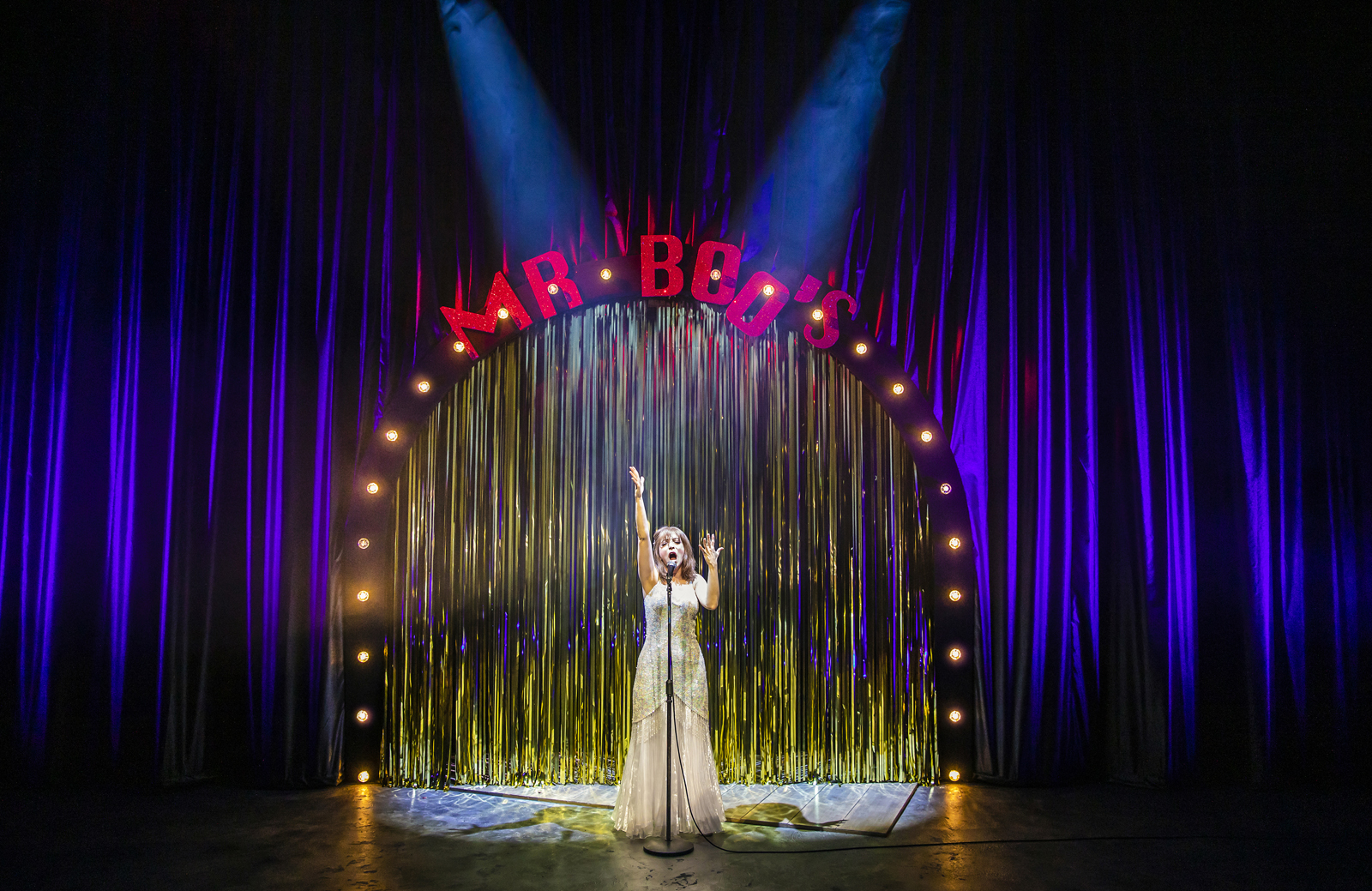 Little Voice the play is currently on tour and tells the story of the shy, agoraphobic Little Voice who spends her time in her room listening to her late father’s record collection (Judy, Marilyn, Shirley, Barbara, Dusty, Cilla etc!) and her overbearing, larger than life mother Mari. When Mari hooks up with small-time agent Ray Say she thinks she’s found her last chance at a better life and in turn when Ray overhears LV singing “The Man That Got Away “as Judy Garland he thinks he’s found his meal ticket to the big time to the bright lights of the showbiz world that he dreams of.

Starring voice impersonation sensation Christina Bianco as the main character LV, Shobna Gulati as Mari, Ian Kelsey as Ray, Akshay Gulati as Billy, Fiona Mulvaney as Sadie, and at the performance I saw James Robert-Moore as Phone Man / Understudy Mr Boo.  You may remember the play as a award winning movie in 1998 starring Jane Horrocks as the title character but the story begun as a play in 1992 by Jim Cartwright.

We first meet the characters on an important day in the Hoff household as a new phone is being fitted and Mari (Shobna Gulati) will join the ranks of the ‘in-crowd’ by getting a phone and more importantly a call from her new beau, local theatrical agent Ray Say (Ian Kelsey). Once the phone is installed by the engineer and his assistant Billy (Akshay Gulati), Mari invites her best friend and confidant Sadie (Fiona Mulvaney) over to see it. In fact, the only person not excited, or even interested is Mari’s daughter LV (Christina Bianco), who is happiest sitting in her room caring for and playing the collection of records left to her by her father.

The only chance of escape from Mari and LV’s lives happen when Ray and Billy arrive, in Mari’s case, she throws herself at Ray while LV allows Billy to get her away from things. Billy the phone assistant tries to break LV out of her shell and in a way the two are very similar, Akshay Gulati plays the role with great sensitivity and conviction. The smooth-talking Ray Say played by Ian Kelsey treads a fine line between sweaty slime and sweet charm, as the play unfolds, he becomes more unlikeable and Ian plays this really well.

Ray hears LV singing and invites the local club owner Mr Boo (James Robert-Moore) to witness this new talent he has discovered and pushes her forward to perform her act at the local club. James Robert-Moore was superb as the club owner Mr Boo; he only has a few scenes with the other characters, but he also comperes the performances in his club, working the theatre audience as though they were his club audience.

Anyone stepping into the role of Little Voice has a difficult task to follow Jane Horrocks, as she made quite an impression when the film was released, but here Christina Bianco is in her element and shines in the role showcasing her talent of impressions and manages to create effectively the quiet, unhappy, vulnerable young girl who suddenly acquires confidence when she can sing as someone else.

Although the play and subsequent film are famous for LV’s vocal impressions the show really belongs to Mari; Shobna Gulati gives a tour de force performance ringing every last ounce out of her northern vowels. Mari is hard not to love and hate, her energy is a great source for all of the other performers to feed on.  Strong support also comes from Fiona Mulvaney as Mari’s punchbag of a neighbour Sadie and provides the much-needed heart to this tale.

Cartwright’s Cinderella story is nicely put together and performed, a well-honed intelligent show with some absolutely first-rate music.  Be a “Big Spender” today and “Get Happy” by booking a ticket to see The Rise & Fall of Little Voice.