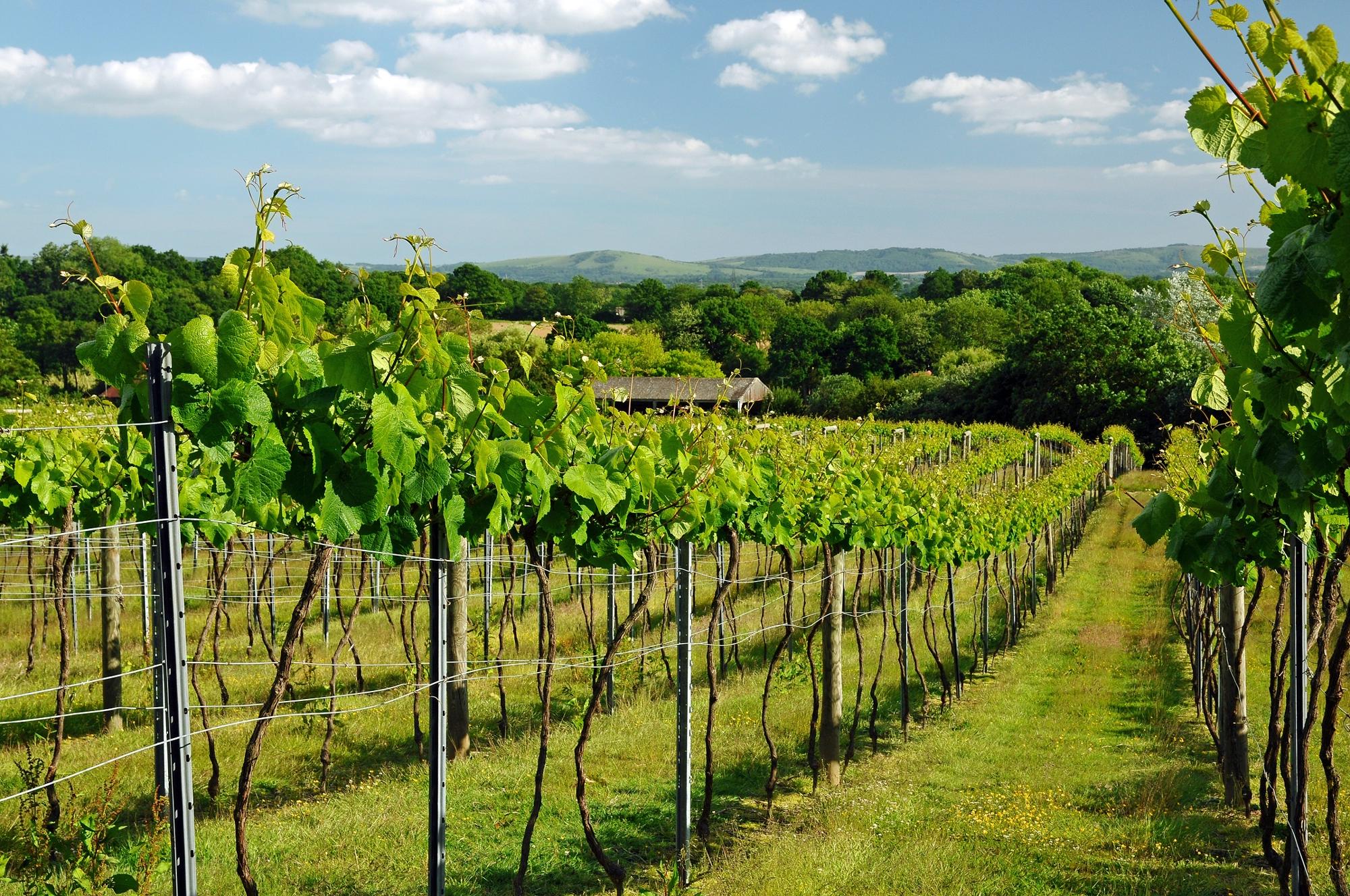 Whilst the world has been in lockdown, the 500+ English wine vineyards across the UK have been flourishing, and there are countless red, white, rosé and sparkling wine varieties ready to sample this summer. It’s no secret that England sees a lot of rain, but somehow, with perseverance, a lot of faith (and a touch of global warming), the temperatures are rising and are perfect for cultivating a blend of cool-climate grapes.

England is an exciting new force in the wine world- particularly notable for its bubbles.  Although some still wines are made, it is sparkling wine that has won the hearts of the nation, and represents 65% of all English wine production.

However, this is a new trend, as the original grapevine first arrived on England’s shores along with the Romans, who brought viticulture with them to every new land they sought to conquer. Access to wine was a right of every citizen and slave, and the Romans planted vines to ensure there would be enough wine to go around. After the fall of the empire, Christian monasteries maintained vineyards for a while, but they lost favour for several centuries until after the war, when the interest in commercial viticulture in England was rekindled, and slowly but surely, wine lovers have been investing in our chalky land to create some pretty impressive offerings.

English Wine Week takes place from 19- 27th June and is a great way to celebrate the British eccentricities which arise from the fruits of our notoriously famously wet conditions. Thankfully the soil helps – resulting in delicate grapes with higher sugar levels, which produce a unique range of sparkles and still options. Here’s our pick of the best . . .

What could be more satisfying than watching the sunset and enjoying a bottle of two of delicious wine under the stars without having to worry about who’s driving? Hencote vineyards have you covered, as they provide luxury glamping for thirsty guests. With an inhouse restaurant serving locally sourced produce, this is the dream vacay for wine lovers, who have a delightful south facing view of the Shropshire Hills. situated on what was formerly glacial land, the nutrient-filled soil and optimal sunlight exposure are part of the magic that make up the Hencote blends

Made by Cherie Spriggs, one of the few female winemakers in Britain, this Sussex offering is making waves with lovers of fizzy wine. Partly due to the limestone chalk soil- which mimics the famous soil of Champagne, and partly due to the consistent care to the oldest vines in England.  With a 15th Century Medieval Barn offering tastings,  if you can’t make it to Pulborough, Nyetimeber have partnered with Brighton’s i360 for a flight and fizz, which is the ideal setting for tasting three of the best selling sparkling wines, including the gold-medal winning Classic Cuvee, Rosé Multi-Vintage and our Cuvee Chérie Multi-Vintage.

Another organic Sussex vineyard, Sedlescombe Farm (England’s first organic–now biodynamic–vineyard) faces the impressive Bodiam Castle. The location in the countryside takes advantage of the cooler climate to preserve the acidity needed to make top tier sparkling; whilst the rest of the biodynamic range have a strong mineral character, reflecting the soils in which the grapes are grown. Visitors are invited along to enjoy wine tastings, or if you’re driving, they also offer afternoon high tea in the delightful garden.

Make a holiday of it at the Wythall Estate, near the market town of Ross-on-Wye, and enjoy the scenery as much as the wine. Visitors can enjoy a guided tour of the winery and a tutored tasting in the sixteenth century Manor house (available from Feb-Dec), which is surrounded by pretty flowering gardens, a freshwater lake and wooded grounds surrounding the vines. The two separate self-contained cottages are in the west wing of the Manor house, with The Game Larders sleeping two and The Old Bakehouse sleeping four. Dogs are welcome at both.

For a small, family-run biodynamic vineyard in Surrey, Albury has big ideas. From the jam packed calendar of events all year round which include “Biryani and Bubbles”, “Sparkling Afternoon Tea” along with more traditional vineyard tours and tastings. They also do bee keeping courses! And to celebrate English Wine Week, on the 24th and 25th June they are hosting “Opera in the vineyard

A family affair, Peter and Sharon Maiden produce a boutique selection of award winning Bacchus and sparkling Pinot Gris wines and rent out two different self- catering properties. The Grade II listed Hop Cottage sleeps four and Vine Lodge (which is right on the edge of the vineyard itself) sleeps two. The eco-friendly design of Vine Lodge doesn’t compromise on luxury and guests staying here will love relaxing on the terrace surrounded by vines overlooking the Black Mountains enjoying a bottle of Coddington wine, which is included in the welcome pack. The convenient on site shop stocks lots of local goodies and the nearby market town of Ledbury makes a lovely day trip.

Situated on the rolling North Downs hills on the outskirts of Dorking, the chalky soil and micro-climate make it ideal for producing consistently award winning wine in England’s largest vineyard. Due to its enviable location opposite Box Hill, many guests enjoy trekking the seven miles of public footpath including part of the North Downs Way and stopping at the Denbies Wine Estate “hatch” for sustenance before heading home.

The undisputed delicacy of English sparkling wine, along with the undisputed grape-growing conditions, have proved enough to lure the first of the major player champagne houses across the channel. With a south- facing orientation maximizing  the hours of sun on the vines, Taittinger  is the first Champagne producer to jump on the English sparkling boom.  Having bought land in 2015,  Chardonnay, Pinot Noir and Pinot Meunier grapes are plumping as I type, and the vineyard will release the first bottles in 2024.

Ways To Celebrate The Platinum Jubilee

The Recipe to a perfect Easter Sunday

Valentine’s Day Gift Guide for Him, Her and...