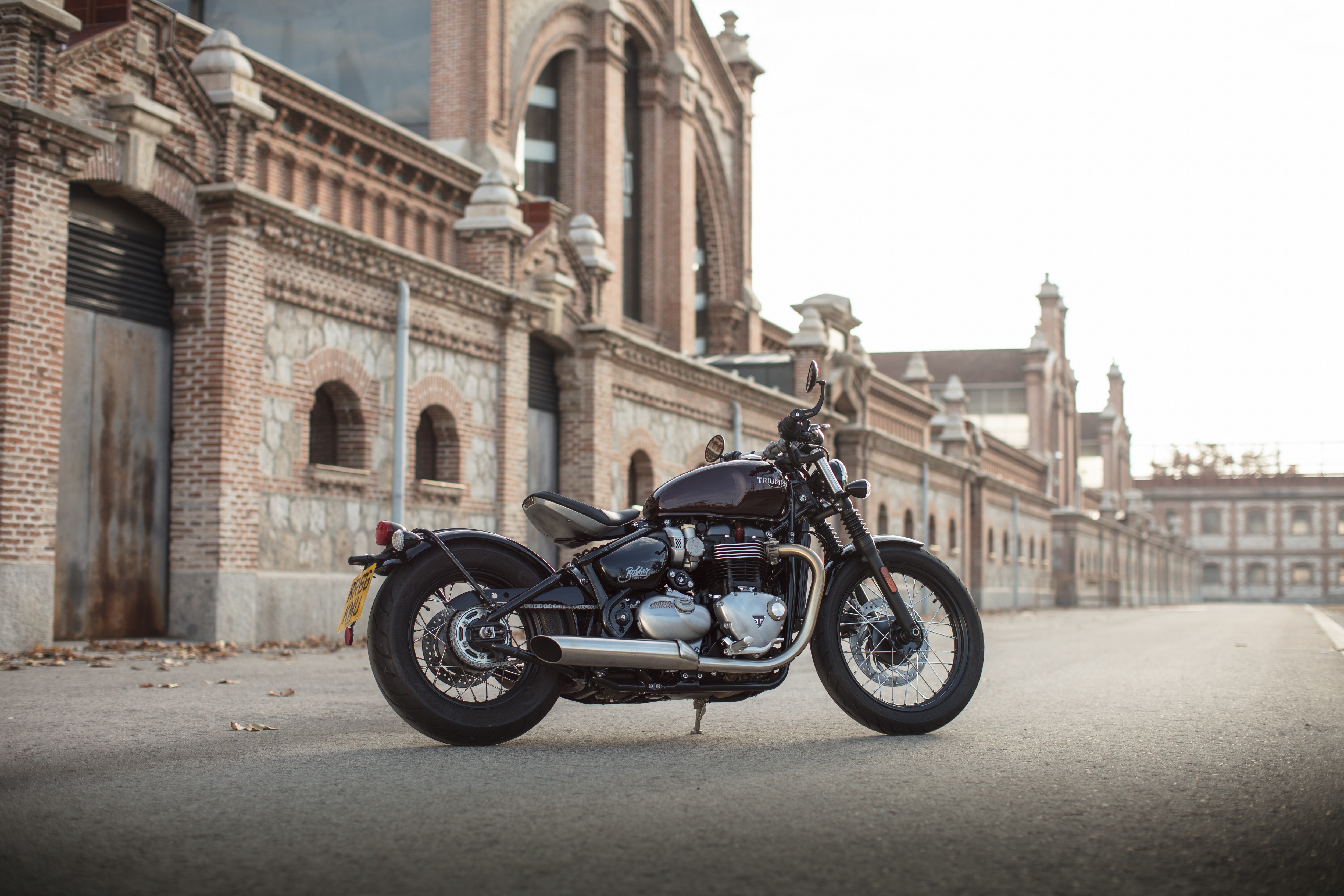 First came the new Mini, then the Volkswagen Beetle, and latterly the Fiat 500, all thoroughly modern cars dressed up to look like classics of the past. And this trend is in no way limited to four-wheelers: here we have the Triumph Bonneville Bobber, a new addition to the venerable Bonneville range, delivering cutting-edge bike technology beneath post-war styling.
I remained largely sceptical of the wannabe throwback cars until I had the chance to hurl a Fiat 500 Abarth round the streets of Rome for an afternoon, but could I have as much fun on the Bobber?

Traditionally a bobber would have been home-crafted, a rejection of the original factory aesthetic, a stock bike cut down for lightness and speed, but now here is a ready-made bobber, fresh off the line and ready to roll.

Some may mock those who purchase “distressed” clothing, preferring to scuff up their own denim rather than buy it pre-scuffed, but why go through all that bother when someone else can do the hard yards for you? Some prefer to build a bike from the ground up, and I salute them, but for anyone seeking an off-the-peg solution to their bobber dreams – here it is.

The Triumph Bonneville Bobber is a good-looking bike. Unconventional, sure, but a peach nonetheless. The whole thing, aside from the engine, has been designed from the ground up, and it all works beautifully together. Obvious highlights are the floating seat pan and sculpted tank, with deep and lustrous paint.

I love the fact that Triumph has produced such an authentic Bobber look without trying to pretend that the bike is from the 40s: the swing cage provides a perfect hard tail profile, but no undue attempt has been made to conceal the clever monoshock beneath the seat. This is a bike that proudly wears its exaggeratedly retro styling but rightly has no shame about some of its necessarily modern elements. Even within the single dial and relatively uncluttered controls you will find road and rain modes, along with traction control. There is a gear indicator (surprisingly welcome), digital rev counter (of limited use) and all the usual read-outs.

There is, unsurprisingly, a substantial catalogue of aftermarket parts with which to make the Bobber uniquely yours. You’ll probably want to bin the sail-like number plate and switch out the exhaust cans straight away, and can then choose from all manner of tricks and trinkets, large and small. The odds are that if you buy this bike you have an eye for style and detail; and that Triumph will be able amply to cater to your desire to subtly modify the machine to your precise taste.

In town, the Bobber is sleek and well-behaved. Its dimensions and weight distribution mean you can easily cut through traffic, but even if you get stuck it’s no hardship, as you feel the admiring, often envious gazes of passers-by; attracted first by the low rumble of the idling engine, then by the Bobber’s striking looks.

First gear is ideal for stop-start, but feels a little contained once you’re on the open road. A quick dump into second though and the 1200 really opens up, feeling like it has everything to give, with second, third and fourth being long, glorious expanses of torquey power.

I had rather thought that the Bobber might be best suited to sea-front posing, and was more than a little surprised to find that the bike itself seemed keenest to get out into the B-roads and have some real fun. It behaves impeccably in the bends, leaning quickly and precisely and holding a line with ease. I often found myself with the throttle fully open, but never felt that the bike was holding out on me. The slip-assist clutch is forgiving in aggressive downshifting and the brakes (single disc front and back) are perfectly adequate, with ABS kicking in seamlessly if you misjudge things.

I threw the bike round a variety of wet and dry roads, and struggled to make it misbehave. There’s nothing revolutionary about the handling, but it is just SO much better than you would ever expect (let alone hope for) from a bike in this category. And there is an indefinable quality of fun to it. The bike just seems to have a spark of joy in its soul – it wants to play and seems to respond better and better the more joyfully you ride it, roaring with glee as you jam open the throttle.

And so to the sound… the sound! The Bobber is unabashedly designed to be a feast for the eyes, but thought has clearly gone into the auditory impact as well. Equipped as it was with Vance & Hines slip-ons, the model I ripped around on had a perfect rumble – never rowdy but ever-present like a dragon in its lair, sitting on the treasure of this finely-tuned power plant. At idle the dragon breathes gently, with a menacing growl; as you open the throttle it clears its throat with a satisfyingly deep rasp and then as you give it the beans the dragon responds with a gleefully bassy roar. I am forever complaining of bikes being too loud, too quiet, too whiny, too raspy; so to ride a bike with such a perfectly pitched soundtrack was a real tonic.

The Bobber sounds good, looks good and behaves itself. It is compliant around town, great fun on back roads but even manages moderately well on the motorway. The sixth gear and abundant power allow you to maintain a good cruising speed at low revs. You can even go ton-up with ease (on a private airstrip, of course) though you’ll be hanging on hard (and don’t try it in a cross-wind). No one would expect the Bobber to be an intercity bike, but for occasional longer hops it’s more than ok. It was never meant to be an all-rounder, but if you (like most) only have the one bike and don’t do a lot of longer trips then it won’t hold you back.

You can look elsewhere for bikes in this category: Moto Guzzi, Yamaha and Indian all have respectable offerings; and Harley-Davidson’s Sportster range can all be chopped and bobbed to your heart’s content. I retain a big soft spot for the Harley-Davidson Iron 883, but even within the Motor Company’s antiquated range it is starting to look increasingly outmoded, and until they can produce a version with an equivalent of the new (and superb) Softail chassis, it could only ever lose out in terms of ride and handling to Triumph Bonneville Bobber.

I could say more about the exciting and radical looks but just check out the pictures. Better still, go find the bike itself and I guarantee you’ll be impressed. I could try to better describe the sheer fun factor of chucking it about, but go take one for a spin and you’ll see what I mean. This won’t be the right bike for everyone, but it’d put a smile on anyone’s face, and will no doubt surprise you like it did me with its unexpected capabilities and charming desire to get out and play.

If you can wait a couple of months, you’ll also be able to get your hands on the 2018 addition to the Bobber line-up: the Bobber Black. It will offer a meaner look, blacked up from front to tail. The front end is beefed up with a fatter tyre on a 16″ wheel (compared to the Bobber’s 19″) and more muscular forks, topped with an LED headlamp. It will sport twin-disc Brembo stoppers up front and carry cruise control as standard.

The Bonneville Bobber has so far been the fastest-selling new Triumph ever to be released, hitting a sweet spot between classic styling and punchy performance that has proved enormously popular. Triumph’s decision to broaden and strengthen the range with the addition of the Bobber Black is a clear sign that the Bobber is here to stay. Try it. You’ll like it.

For more information on Triumph and the Bonneville Bobber see online.